American hostility to Germany did not end with the armistice in 1918. The government and the American Red Cross provided massive amount of aid to alleviate hunger and suffering in allied nations after the war, but would not tolerate help to the enemy. 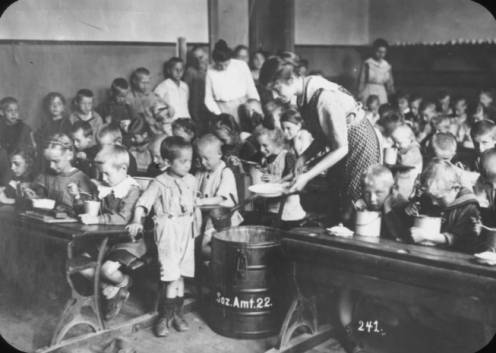 To the rescue came the American Friends Service Committee (AFSC), a Quaker organization.  Guy Aiken, Assistant Teaching Professor of Theology and Religious Studies at Villanova University, tells the story in the September 2019 issue of Diplomatic History.

AFSC was formed in 1917 to give young conscientious objectors a way to serve in World War I without joining the military. Some 600 volunteers helped feed, clothe, and shelter 60,000 refugees in Allied countries before the armistice.

But Friends also saw the need for work among the Germans, thinking that “awaiting them in that country [was] an important work of spiritual healing and reconstruction.” The AFSC wanted to demonstrate how the power of reconciling love could transcend nation. Leaders composed a message to accompany every gift of food and clothing: “To those who suffer in Germany with a message of good will from the American Society of Friends (Quakers), who for 250 years, and also all through this great war, have believed that those who were called enemies were really friends separated by a great misunderstanding.”

This view, however, did not preclude a feeling of American nationalism.  President Woodrow Wilson’s vision for the world included a social Christianity which resonated strongly with the Quaker worldview.

The relief program began in late 1919. The AFSC provided food and clothing largely through the German Central Committee for Foreign Relief (Deutscher Zentral Ausschuss fur die Auslandshilfe, or DZA), an emergency committee formed by German philanthropies to coordinate between American donors and the German cities organizing the aid. Cooking was done largely in central kitchens which had been built during the war when women worked in factories and could not cook at home. The effort gave the German language a new word: Quaeckerpeisung, or Quaker feeding.

The AFSC always intended to turn the program over to the Germans as soon as possible, and by August 1922, the group had only one representative in the country.  The DZA was supposed to handle the work thereafter.

In January 1923, however, the French and Belgians occupied the Ruhr Valley in the German Rhineland.  The German government had resisted paying the punitive reparations called for in the Treaty of Versailles, and the French and Belgians occupied the area to confiscate the coal reserves and industrial production of the region as compensation. AFSC workers returned to Germany to organize renewed aid, again through the DZA.

Through September 1924, the AFSC fed more than 5 million German children. In doing so, it arrested the spread of Bolshevism and despair in the country, perhaps saving the entire German government—important work of spiritual healing and reconstruction indeed.

© Thomas J Hildebrandt, 2018-2019. Unauthorized use or duplication of this material without express written permission from the copyright owner is prohibited.